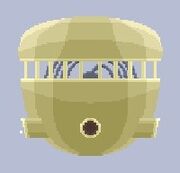 This is the nest the Clockwork Wasps swarm from.

Maximum Payout of the wasps

Clockwork Wasps are a boarding-type Monster that launch from their Nests. The nest slowly hovers around the sky as you shoot it. In , 1-2 guard barracks per ship should be sufficient to keep the fleet fighting; conversely, the nest has sufficient wasps to overload the fleet given time. Best to bring up heavy firepower (some cannons, plenty of rockets; saw blades aren't likely to have the altitude needed) and hammer the nest. Unlike the Kraken, Jelly, and gargoyle building, clockwork wasp nests don't visibly show damage, so just keep at it. The payout from defeating the wasps can reach up to $6000 gold coins which can be an early game changer.